Meet Myles Broom, an entrepreneur by both passion and profession. Myles Broom is one of the emerging entrepreneurs in the U.K. Myles grew up in a small city in the U.K. called Peterborough and has had a resilient and dedicated approach to the world of entrepreneurship ever since he was a child. At a young age, when his friends were involved with playing around and partying, Myles would use his time to take up activities that would nurture his talents. From winning a young entrepreneur’s award for creating eco-friendly products from playground waste to taking an apprentice-level role in I.T, Myles had already done far more than an average 16-year-old teenager. During the same time, this high school boy from the UK established a fledgling fashion store straight from his bedroom. The Normal Company is Myles’ most successful venture, and his sole focus today, but it wasn’t the first one. From the age of 14 to 25, the young entrepreneur started a variety of different ventures, mainly because he wanted to learn something new. He has developed and dabbled in a series of businesses including a T-shirt store, content creation agency, an elite members club, and exporting a champagne label that he sourced to the nightclubs in London. With the Normal Company, he is pursuing a business that he is passionate about and excels in. As a result, he has helped tons of global brands accelerate their growth so that they can scale new heights.

Myles is the co-founder of this agency that assists e-commerce brands in scaling them to their highest-ever returns, mainly through paid advertising and systematic email marketing. Broom formerly worked as a marketing specialist in the corporate world before deciding to leave his position in February 2019, whilst simultaneously growing a startup agency in his free time and evenings — stoking a deep dive into launching a brand consulting and e-commerce marketing agency. His marketing background has helped him apply various strategies to his new business which resulted in him excelling at an astonishing speed. He is currently working with brands from around the world to encourage their growth and help them succeed. The Normal Company’s clientele comprises some of the top-tier celebrity-endorsed brands including the likes of Kylie Jenner, Will Smith, and Victoria’s Secret Models along with the world’s top Instagram influencers with 1M+ followers. One of his biggest achievements is taking a brand from $70,000 to $500,000+ revenue – within 6 months!

All that Myles was missing was the right press exposure. Due to this lack of exposure, he was also unable to get social media verification which is essential for brand credibility.

Myles had successfully founded an empire for himself but there was one major component missing; media exposure. With little to no press coverage, Myles couldn’t get social media verification as well. What we wanted was to increase his press features by tenfold and get him verified on Instagram.

We helped him out of this pickle by getting in touch with our sources in leading publications and got him featured in various renowned media outlets. 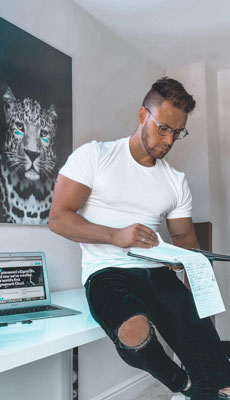 “Nabeel got the job done in record time. He is very knowledgeable about press and verification. We will be working with him again in the future!”