Entrepreneurship can be quite challenging, but Cameron Farthing has proved it through his journey that there is nothing you can’t achieve without hard work and persistence. He didn’t opt for the conventional methods when it came to starting a career. Cameron took a leap of faith and dropped out of college to discover his path in life. At first, he had no clear direction. However, he soon found out about Commercial Diving — an extremely daunting job that paid well. He enrolled himself in the course and spent 3 years working. This wasn’t easy as he had to loan 12,000 pounds from his father for the training course plus work 12 hours offshore. Even though it paid well, it was not something he wanted to make a career out of. Fascinated by earning online, he also experimented with side hustles like starting his YouTube Channel, Growing and Selling Instagram Accounts, Affiliate Marketing, and Sneaker Reselling but he didn’t find it interesting enough. Cameron realized e-commerce was where his passion lay when he earned a profit of 4000 pounds from an e-commerce store he established himself. He quit his 5 figure job as a Commercial Diver and successfully launched several other e-Commerce platforms to hone his skill set and acquire knowledge about digital marketing he surrounded himself with the top 10% in this field. He realized digital marketing was his strongest forte, and it would eventually become the foundation of his biggest business.

Today, at 25, Cameron Farthing is a digital marketer and the co-founder and director of The Normal Company. He is successfully working with brands globally and helping them uncover their true potential and achieve their goals. The hustle has been an ongoing aspect of Cameron’s life. Right now, he lives in a house that he financed when he was running his own multi-6-figure brands at 19. After identifying his passion, Cameron realized he wanted to bring out the big guns for his business. This meant getting in touch with brands that wanted to grow. At The Normal company, he has made it possible for tons of his clients to accelerate their sales and jump into higher revenues. His company has helped a brand that was previously earning $40,000 in monthly sales to make over $250,000 in monthly sales within 5 months. The agency’s clients include celebrity-endorsed labels, such as ones that work with Kylie Jenner, Will I Am, and Josephine Skriver, and have helped them achieve outsized returns on ad spending.

All of this is pretty impressive but Cameron knew that to secure a permanent place in the industry, he needed press coverage. This is where we come in with various strategies to help him raise his brand awareness and increase his brand credibility.

When we took on Cameron as a client, we knew we needed to get him the best placements in top tier media outlets if he wanted to boost his brand name. We strived to curate such powerful content for him that could improve his media coverage as he had little to none of it when he first came to us.

By securing top-tier media placements, we wanted to make him eligible for social media verification on Instagram, and then get him verified to boost his credibility. 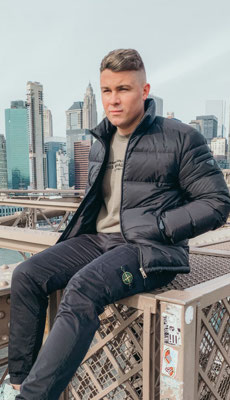 “Nabeel was able to secure many strong media features for me, and helped me get verified on Instagram. Service was delivered as promised. Would recommend Mogul Press to anyone looking for press or verification.”