Melanie Avalon is a SAG-AFTRA award-winning actress, best-selling author, and content creator. Melanie has starred in various top movies and TV shows as an actress. She is a member of Mensa International, holds a certification in Holistic Nutrition, and is qualified as a wine specialist by WSET (Wine & Spirit Education Trust). She is currently the host of two top iTunes podcasts, “The Intermittent Fasting podcast” and “The Melanie Avalon Biohacking Podcast.”

As a young teen, Melanie harboured a flair for performing and was involved in community theatre. At 17, she was accepted into the early entrance program at the University of Southern California, where she double majored in film and theatre and won a Hermes award for one of her short films. Upon graduating, she quickly acquired the coveted membership of SAG-AFTRA, the official acting union, and soon after was nominated for Best Supporting Actress in the Los Angeles Independent Film Festival for Pablo Moline’s No More Chances.

Melanie’s entry into the podcasting world began when she was faced with chronic health challenges of her own. She sought to find solutions, and her fascination with various “biohacking” techniques motivated her to dive deeper into the research, and identify hacks that would transform not only her own life but ultimately, those of her audience as well. She is currently developing her first supplement line, AvalonX, and aspires to develop her TV show, The Melanie Avalon Biohacking show. Representing strong female voices in the biohacking sphere, Melanie’s ultimate goal is to instil people’s health journeys with a sense of hope and agency, characterized by relationships of kindness and gratitude through it all.

Melanie approached us because she needed help getting press exposure so she could build more brand credibility and position herself as an authority in her industry.

Melanie Avalon had very minimal press to her name when she approached us. Apart from a few features on some small blogs, there was nothing major to work with. Our main goal was to craft a unique angle for her story and leverage that to get her features on numerous mid-tier and top-tier major publications.

Getting to just mid-tiers wasn’t enough. Melanie wanted big media outlets to feature her podcast and other ventures. So we needed to leverage our network of connections to get her featured on some of the biggest media outlets that we have access to.

Her goal was also to get verified on Facebook and Instagram so that her followers can know about her authentic presence. So we had to attain enough press coverage to make her eligible for that. 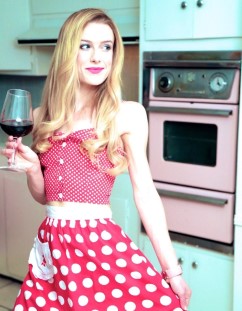 “Thank you so much to Mogul Press. I am very impressed. Everyone says the verification is near impossible, and you guys nailed it just like you said!”