Temple Naylor Born and raised in Miami, is a self-made fitness coach helping other men dial in their fitness, mental performance, and dating life through coaching and programs.

Temple grew up in a small town of Miami where his graduating class was about 15 people. He decided that he didn’t want to go to college or the traditional education system so he dropped out of high school at the beginning of his senior year. He struggled for a bit from there on out as He couldn’t find a job and was living in a mobile home.

After 2 years of struggling, he finally found a job. But after getting a tour of the office and realizing he was now stuck in a cubicle he quickly became depressed and started looking towards online entrepreneurship. He started online business after online business living in one Craiglist room to the next until he finally got his big break.

Initially, Temple did not find support but as a few years passed, his efforts started getting recognition. Now he is a successful businessman he started his own brand as, A Man’s Way, which helps men become their superior self. A superior man. He created this business because like himself, many men grew up without a strong father figure to teach them how to be a man and navigate through life. Many men today are out of shape, have anxiety or are depressed, not confident, and have a minimal if anything dating / romantic life. They chase external factors such as success and money, thinking that’s what will make them happy only to realize that it doesn’t. The breaking point for him was when he finally made $30k in a month and then realized He was more unhappy than he ever was. It was at that point he realized he needed to stop chasing/working on the external things in life and instead work on the internal side of himself.

The goal of Temple Naylor’s business is to take as many men as possible out of their mental/spiritual ruts in life. To help them overcome trauma, find happiness, get in the best physical shape of their life, find confidence, and boost their dating life.

Further Temple’s goal is to take as many men as he can out of this rut and put them back in their core power and become their superior self.

Temple came to us because he wanted to boost his brand further, his social media credibility and authority and he wanted to get verified on Instagram.

Temple Naylor was widely known as an expert fitness coach. However, he wanted further to boost his brand and social media credibility and authority. We needed to craft out a unique angle for Templer’s story and help him get press features in different significant publications to verify his account on Instagram. 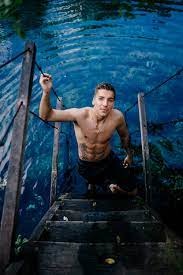 “Mogul Press did an amazing job. They got me verified on Instagram in a very short amount of time which did wonders to building my brand. I highly recommend working with Mogul Press. Thank you so much.”